ONTONAGON COUNTY  is located along the south shore of Lake Superior towards the western end of Michigan’s Upper Peninsula. It includes some of the most beautiful areas in the state of Michigan, such as the Porcupine Mountains Wilderness State Park, the Ottawa National Forest, and Lake Gogebic, the U.P.’s largest inland lake.

Ontonagon County is in the Eastern Time Zone and encompasses the North half of Lake Gogebic.  This is always fun on New Years Eve where you can celebrate first in Eastern Time Zone and then head down the lake to celebrate once again in Central Time Zone. It’s kind of crazy but you get used to it after awhile…when making plans you’re always asking “in my time or your time?”, “real time or your time?”.

Ontonagon County has over 1,200 miles of streams and rivers.  Canoing or kayaking on rivers or viewing the many waterfalls are a tourist delight.  Bond Falls, Agate Falls, and O-Kun-de-Kun Falls are just several of the more popular.  Lake Superior provides some excellent fishing as well as Lake Gogebic and the countless other inland lakes and streams located in Ontonagon County. 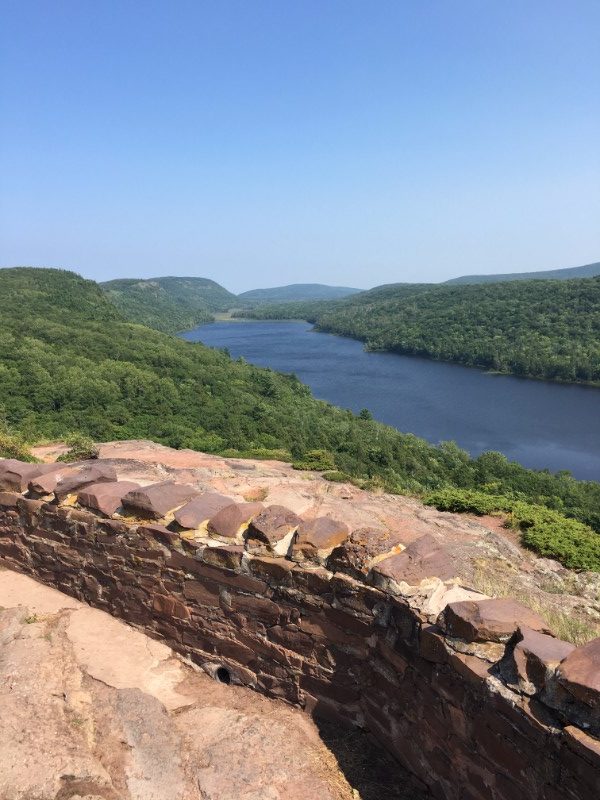 Located within Ontonagon County, the PORCUPINE MOUNTAINS WILDERNESS STATE PARK was established in 1945 and remains virtually unchanged since then. Its 60,000 acres are one of the few remaining large wilderness areas in the Midwest. Some of the park’s many attractions include Lake of the Clouds (one of the most scenic spots in all of Michigan), and Summit Peak Observation Tower (one of the highest points in Michigan). Sandy beaches along the Lake Superior shoreline are good for swimming and agate hunting. History buffs can explore self-guided trails to old mining sites on the Union Mine Scenic Trail, the Nonesuch Mine location, the old Carp Lake Mine, and the historic Carp Lake Stamp Mill site.

Learn More About the Porkies

Ontonagon County was organized in 1843 by James K. Paul.  Ontonagon is the oldest permanent settlement on the south shore of Lake Superior.  The port was used extensively by the copper and silver mining industries until the turn of the century.  The famous Ontonagon Copper Boulder was removed by James K. Paul and is now at the Smithsonian Institute in Washington, D.C.

The Lumbering Industry was a major employer in the early 1900’s with the Diamond Match Company located at Ontonagon being one of the more well known.  The Lewis Genson Company of Ewen became one of the biggest users of hardwood in Ontonagon County.  During that time, Ontonagon County’s population was more than 12,000.

The Porcupine Mountains Wilderness State Park offers an interpretive guide along  the Union Mine Trail.  The Union Copper Mine, established in May of 1846, was on the leading edge of our nations first mining rush.  Along this 45 minute trail you will have occasion to visit the site of the historic mine.  As you walk along the trail, you need to draw upon your imagination.  Picture yourself as one of the early miners in this rugged and remote land to working for $40 per month in dangerous conditions.  Your breakfast would have been bread and pork with home made corn coffee.  From the corner of the cabin you would retrieve your pick and shovel and head down to put in a shift at the “diggins”.

Like most claims in the Porkies, the miners who worked the Union excavated numerous shafts and pits in their search for copper.  There were crude ways of excavating for copper like a wooden dam and water wheel.  Early in 1848, the Union mine was abandoned along with a large amount of machinery.  Hundreds of tons of rock had been removed from the mine, but little copper was discovered.

The property lay idle until 1864, when record Civil War copper prices inspired new owners to reopen.  The old number 1 & 2 shafts were enlarged and two more shafts begun.  Some Shafts were dug quite deep.  All work underground was done by hand labor using pick, shovel, sledge, steel drills and black powder.  Ore was hoisted up to the surface in large buckets called kibbles”.

Most travel was done by foot, but oxen were used to transport wagon loads of supplies and machinery.  A stamp mill, blacksmith shop and pine dwellings were also located nearby.  There was also a boat landing on Lake Superior.

It was no accident that many early mines were located alongside a river or stream.  In the rugged land, miners quickly learned that the exposed rock of a riverbed made for easier prospecting.  Once a copper vein was located, the flowing waters would prove valuable for power and washing the ore.

There were 40 copper claims made in the Porcupine Mountains, but only a handful commenced serious mining work.  They were the LaFayette 1845, Union 1846, Carp Lake 1858, Cuyahoga 1859, Porcupine Mountain 1860, Lone Rock 1859, Miscowabic 1859, Nonesuch 1867, Halliwell 1985 and White Pine Extension 1914.  None of these ventures. however, profited on the small deposits of copper flakes and grains they found in their Porcupine Mountain Mines.

The Bergland Museum is located on the western outskirts of Bergland on Hwy-28.  (www.berglandmuseum1.com).  Its like walking into someone’s home during the early 1900’s.  Each room has its own dedication to certain like items.  There is also a Military room,  US forest Service displays, as well as the CCC camp.

Ontonagon County Tours of the Ontonagon Lighthouse are available during the summer or by appointment on Sunday or the off-season 906-884-6165. The 5th Order Fresnel Lens and keeper logs are on display at the museum. Climb the tower to the lantern room for an outstanding view of the area. Tours begin at the Ontonagon Museum at 422 River Street.

The Ontonagon County Historical Museum (www.ontonagonmuseum.org) is located at 422 River Street in Ontonagon. Enjoy their mining, logging, farming, marine, and social memorabilia displayed in room settings and cases. There is also a very interesting museum on US-45 in the library in Rockland. They host a unique collection of artifacts dating from 3000 B.C. to the early 1900’s, and the switchboard used by the first telephone company in the state of Michigan.

Historic Rockland, site of the famous Minesota Mine, has a fine museum, and nearby Old Victoria Restoration, a mining camp brought back to life, is open to public tours. Be sure to visit the highest hydroelectric dam in the Midwest. The Victoria Hydro is on the nearby West Branch of the Ontonagon River.

Experience a little of the supernatural: visit the Paulding Mystery Light located in Robbins Pond Road just north of Watersmeet. Visitors from “Unsolved Mysteries” and NASA attempted to unravel this phenomenon with no results.

Would you like more information about visiting the Lake Gogebic, Ontonagon County, and Gogebic County areas of the Upper Peninsula of Michigan?

It’s easy… just let us know what you want to know and we’ll put you in the know.

Any cookies that may not be particularly necessary for the website to function and is used specifically to collect user personal data via analytics, ads, other embedded contents are termed as non-necessary cookies. It is mandatory to procure user consent prior to running these cookies on your website.

SAVE & ACCEPT
Change Location
Find awesome listings near you!